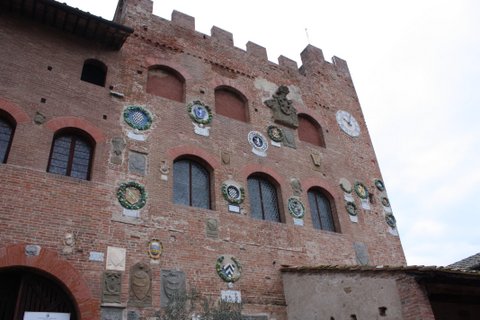 Certaldo is easily reachable thanks to the funicular that leads directly to the heart of the medieval core, just from the lower modern part of the town. Everything in the village speaks of its most illustrious son, Giovanni Boccaccio, who spent the last years of his life here and wanted to be buried in this village. Our tour guide will take you on a visit to his house (now the museum of the Giovanni Boccaccio National Organization) and to the nearby Church of Santi Jacopo and Filippo where his tomb is located.

The guided tour will then continue with the most monumental of the Certaldese buildings: the Palazzo Pretorio, which stands on the top of the fortified hill and whose facade, loaded with noble coats of arms in terracotta and stone, looks like a theatrical backdrop to the main street. For centuries, that was the seat of one of the Vicariates into which the Florentine territory was administratively divided. Not to be missed—the Tabernacolo dei Giustiziati, a masterpiece by Benozzo Gozzoli, which you will pass by in your museum itinerary.

Admissions to be paid for: Casa Boccaccio and Palazzo Pretorio

List of places we will visit during the sightseeing “Certaldo”: